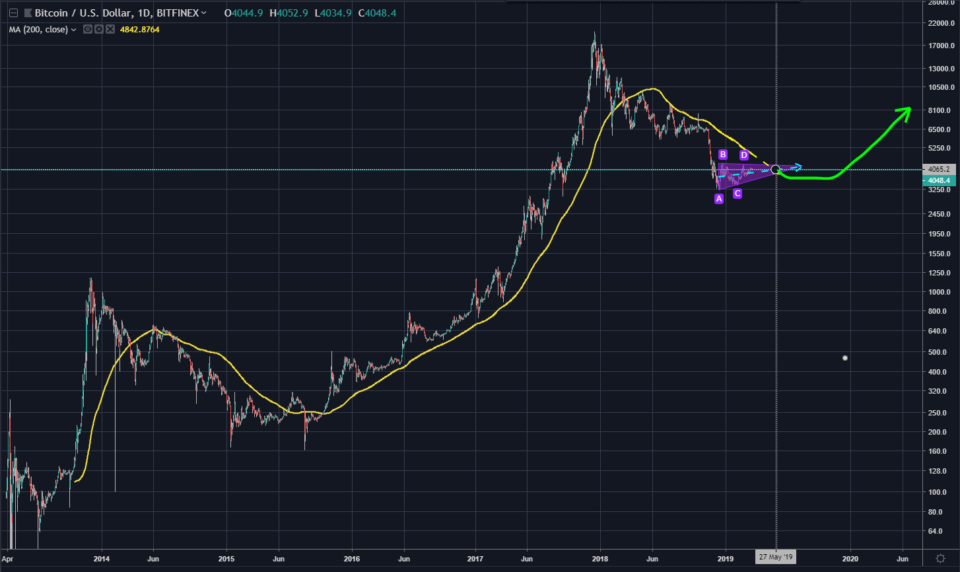 Some time ago (Just before Christmas 2018) I wrote a three part series titled: “To CAPITULATE or NOT to CAPITULATE? That is the question”. Part 2 of that series “The Answer” was dedicated entirely to an argument against (further) capitulation and was based on only one thing: the 200 MA.

I suggest reading The Answer before reading this post, because it lays the groundwork for this post and provides a few insights which I will not be repeating. You can find it here: https://mentormarket.io/bitbrain/to-capitulate-or-not-to-capitulate-that-is-the-question-part-2-the-answer/

For those who may be interested in further reading, the rest of that series may be found here:-

It’s funny to look at those old posts now – nobody seems to be discussing “Capitulation” anymore – I’m now convinced that I was right when I said that: “Capitulation already happened and most people missed it” – I’m chalking that one up as a win for Bit Brain!

Note: I know many people prefer to use the EMA to the MA, I’m not one of them. I’m strongly of the opinion that half the people (or more)  who use TA tools and indicators don’t understand what they are working with or why they are using a specific tool instead of another. The EMA is biased data, sort of like an MA with a Kalman Filter slapped onto it. I far prefer the unfiltered tale that the MA tells. You could always emulate the EMA by using an MA  with a  decreased number of time periods – and it would be more accurate. It’s the same reason you’ll often see me use a Stoch but never a Stoch RSI. The Stoch is a derivative indicator and so is an RSI – bad enough as it is. The Stoch RSI is a derivative of a derivative, pretty and smooth sure, but you’re fooling yourself by using it instead of using a single derivative tool.

In practical terms the difference between an EMA and an MA amounts to little. After that little impromptu lesson in TA philosophy, I’ll finally get to the MA…

Below you see a 200 MA on the BitFinex BTC chart. The similarities between the 2014/2015 market and the current market, which were already discussed at length in the “Part 2” posted linked to above, are clear to see.

For the benefit of those who didn’t read that post, I used the earlier market to predict the movement of the present market, including the movement of the 200 MA. Looking at the chart now, it seems that we are currently repeating the events of about March – June 2015. The MA is rapidly moving downwards towards the upward moving BTC price.

On their current trajectories, a crossover is becoming imminent. It’s conceivable that such a crossover will occur around the midyear point (my charted estimate is 27 May).

Because of how an MA works, such a crossover will very quickly make the trajectory of the MA horizontal, just as it was in Q3 of 2015. That will be the final required consolidation period for BTC before it can kick back into high gear and turn properly bullish. I predict that the MA will behave something like this in the medium-term future.

Realise that that is an MA prediction, not a BTC price one. After the midyear crossover, BTC price will be ABOVE the MA line (though it can dip briefly back below it once or twice).

THE 200 MA is still mirroring that of the 2014/2015 market. The imminent crossover will firmly mark the current consolidation period – giving further validity to the arguments of those of us who have been saying this for some months now. It will be a significant technical indicator that even hardened bearish analysts can’t ignore, and should in itself create a little more buoyancy in the market. The bear will not only be dead, but buried as well.

As I have said before, I am aiming to finish my crypto buys (with fiat) before the end of May. I suggest that other buyers work to a similar timeline. I really wouldn’t advise putting off buying until the second half of 2019, by then the 200 MA should have already crossed over and prices should be rising.

Two Minute Crypto – Not Your Keys, Not Your Crypto

A Huge Win For Ripple