I didn’t want to write a post about Libra.

I’m a crypto blogger and, in my professional opinion, Libra isn’t a cryptocurrency. I mentioned it briefly yesterday, as a joke, but I can see that I will have to mention it a few more times.

As an impartial, objective and knowledgeable third-party, I see it as my responsibility to correct wrong opinions in the crypto world. I can’t always convince people, but I can give them a fighting chance and I can then sleep soundly at night, knowing that I have at least tried to help. I have already seen some very confused and misled individuals when it comes to Libra. I want to strike while the iron is hot in an attempt to set the record straight.

This post is a little collection of my early thoughts on Libra. I apologise in advance if it doesn’t “flow” well, I’ll try to keep some semblance of a logical reading order to it.

The correct view of Libra:

I’m still busy with the Libra whitepaper. It’s heavy going because it reads more like a marketing brochure than a cryptocurrency whitepaper. Coming from Facebook, I wouldn’t expect anything else. Please excuse me for now if I make an unjust assumption or two. I will finish the paper – eventually.

Let me start by saying that I am not anti-Libra. Oh for sure: I hate the coin and everything it stands for, but I’m still glad it is here. I know that the word on the street is that Bitcoin price is surging thanks to the Libra announcement. That’s false. You have only to look at the charts to see that there is no definitive Facebook-linked anomaly on them. Had you looked at the Bitcoin charts without hearing about Libra, then you wouldn’t have seen any activity on them which could be described as “unusual”.

However, Facebook is a global name and, like it or not, global names are trusted by the unenlightened. I remind you that the vast majority of the global population remains unenlightened. Critical thinking and breaking the mould are not traits common to most human beings! Even though Libra can’t be considered to be a proper cryptocurrency, the word “cryptocurrency” is being thrown around when speaking about it. Just like JP Morgan coin, Libra will help to justify and legitimise cryptocurrencies in the eyes of the non-crypto masses. I foresee Libra acting as an excellent on-ramp that will introduce people to the world of crypto. From this perspective, first Bitcoin and then the altcoins stand to benefit greatly from Libra and its global reach and reputation.

Of course Libra is a Facebook product, this must always be remembered. I laugh loudly at the fact that it will be run by an “independent” company – an obvious attempt to give Facebook plausible deniability when it comes to its own coin. Facebook is trying to protect itself from any negative press, negative public opinion or possible legal/regulatory issues, by essentially establishing a front company. Well done Facebook, you are now officially operating from the playbook of the Mafia. The difference between Facebook and the Mafia is that Facebook is less honest about its intentions and has greater global reach – think about that for a moment…

I have neither the time nor the inclination to list the many ways in which Facebook has already harmed its own users. Spend five minutes on Google and see some of the worst examples for yourself. Suffice to say: Facebook has proven beyond a shadow of doubt that it will readily:

With this being common knowledge, I question the intelligence of any crypto investor who even entertains the possibility that Facebook may have established Libra as a selfless gesture in order to help the masses. Disturbingly, I have seen a large number of such crypto investors on the crypto forums!

Let me tell you why Libra was established: like the marketing documentation, sorry, the “whitepaper” says, Libra was established to give the unbanked access to monetary facilities. Yes, that much is true – but WHY? It’s really simple: Facebook already has methods to extract money from the banked as well as to sell their data for profit. Facebook does not have a way to make money from the unbanked. Facebook is approaching maximum market penetration in developed markets, so it is turning its focus from those saturated markets to the unsaturated undeveloped markets. That will allow the behemoth entity to keep growing and consuming.

Libra will open up a new avenue for Facebook to make money off its users, including the unbanked. That is why we now have Libra.

I have been saying since the start: centralised entities are going to fight against crypto, but once they realise that they are missing out, they are going to race to get aboard and will attempt to make their own rubbish centralised coins. Which are doomed to fail. I have already discussed this in detail for those who may be interested: “Private Blockchains”.

This is where things start to get fun to watch:

Maxine Waters, Chairperson of the US House Financial Services Committee, has just called for Facebook to pause the development of Libra until Congress can study, understand and review it. She is not alone, her fellow politicians have suddenly woken up to the reality that cryptocurrencies are taking a massive leap in popularity. Cue their predictable panic.

Being autocratic, arrogant bullies, many uninformed politicians believed that they had cryptocurrencies under control. I think that it took a global name like “Facebook” to highlighted to them that they most certainly do not! Now we get to watch and laugh from the sidelines as centralised entities take swings at one another in a vain attempt to maintain their stranglehold over global finances. Facebook wants to protect its “right” to milk billions of people for everything that they’re worth. Governments want to protect their “right” to milk billions of people for everything they’re worth by keeping their wicked fiat currencies at the top of the pyramid. There is a conflict of interests between them…

Mark my words, this is only the first of many such fights. Like starving wolves fighting over a rapidly shrinking bone, we will see banks, governments and multinational corporations attack one another over and over again. Their evil greed, the same driving force which these organisations have relied on for decades, is finally going to bring them down!

Read this rather brilliant series for a full explanation of the mindset behind greed, money and power:

Isn’t this wonderful? Isn’t this what we have been waiting for? Isn’t this the very thing that Satoshi set out to do when he first published his Bitcoin whitepaper? You bet it is! The importance of crypto is not that is makes a few clever early investors rich, it’s that it can return wealth and power to where it belongs: in the hands of the people.

Even if you only see me as a bitter cynic who is wrong about everything that he’s said thus far, Libra remains stablecoin, meaning that as an investment it is practically worthless. It may have store-of-value properties, but it won’t have any meaningful Return On Investment to offer like good cryptocurrencies do. As I said yesterday when I briefly mentioned Tether: Stablecoins aren’t cryptocurrencies; they are crypto-based money making schemes. When you buy a stablecoin, you swap something of value (like fiat or BTC) for a fiat backed token. This is very profitable to the entity behind the stablecoin: they can invest your funds (whatever you paid for the stablecoins) and get some sort of return on their investment. A high interest savings account would be a good example of a typical low-risk, high security way of doing this. They earn money by selling you a tokenised version of fiat that you can’t readily invest. Why else do you think we’ve seen such an explosion of companies jumping aboard the stablecoin bandwagon in the last year? It wasn’t to help you buy BTC… Stablecoins are just another way for big money to try to profit from crypto. This is why I’m telling you that Zuckerberg is not launching Libra to help the poor masses of the world, he’s doing it to turn their money into Libra, so that he can make money for himself by investing theirs. That’s my hastily formed opinion on the matter, make up your own mind (Spoiler alert: I’m always right about things like this).

There is another interesting permutation to this circus act: I’ve seen it suggested (I apologise that I can’t remember where I read it) that Facebook may be forced to pay interest to Libra holders because there will be an outcry if it pockets all the interest. Tether doesn’t pay interest, but Libra may reach a far wider audience and may be forced to do so. Can you imagine the outcry from regulatory bodies if it does? The SEC will have kittens and throw the word “security” around faster than a politician can tell lies. Centralised entities will fight each other with renewed voracity! All of this will further steer people towards real, decentralised crypto, and us crypto investors can continue to sit on the sidelines and laugh!

I think that the very concept of a Facebook coin is a joke. It has some benefits for crypto, but the coin itself will be another fiat-like scam which ultimately exists to make the rich richer by both direct means (like making interest from their fiat) and indirect means (like through exposure and hype – have you checked the Facebook share price lately?). I will continue to treat Libra as the joke which it is, and I won’t be alone! Perhaps Peter McCormack said it best with this tweet yesterday:

Though perhaps THIS joke of his was even better!

No wait, perhaps THIS response to McCormack was the best joke of all!

Get your lawn chairs, sun umbrellas and Martinis ready! I’m going to relax and enjoy the show! You should do the same. ??

Garbage IPO of the Day: $ARLO

Ethereum Breaking Out on No Volume, Meh.

@peepso_user_3(Another Joe)
Love it!
Did you see the initial rendering for the token? Leaked from an insider... 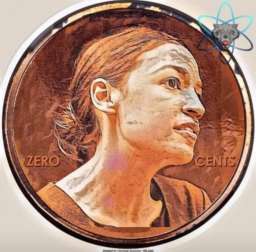 @peepso_user_3(Another Joe)
@peepso_user_18(Bit Brain) She's a joke abroad too? What an embarrassment for US politics. I'd say US voters too, but I doubt she actually would have won without the political shenanigans that go on in the US. Elections are a joke.
1 person likes this