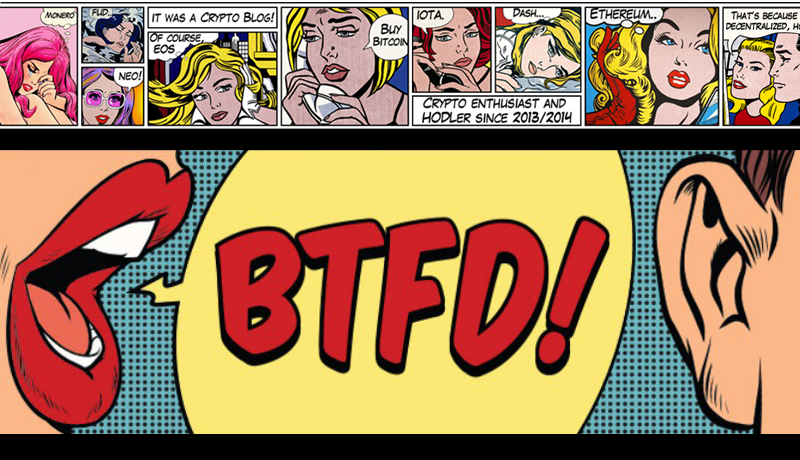 As one of the more pessimistic analysts out there, the recent rise in Bitcoin has finally convinced me that the bear market is over. If that’s not an indicator for you, I don’t know what is! With a change in the market, comes a change in strategy. From now on, it is time to Buy The Flippin’ Dip (BTFD)!

If you’ve following my blog then you know that I have been one of the more pessimistic commentators out there. Having suffered through a crypto-winter before I became very cautious in calling the end of the bear market this time. I’ve seen the carnage before and frankly, general sentiment seemed far too optimistic still to be certain without confirmation.

It appears that we have now sufficiently confirmed that the bottom is probably in. My personal threshold was the $6000-6500 level, and once we broke it confidently it sealed the deal for me. I FOMO’ed in a little bit at $6550.

While trading and investing in a bear market is very difficult and will wreck most people, now that we have turned bullish you may notice that the market has changed and will behave differently.

Most people will know of the HODL meme, and those who are in the space longer will know that beyond the meme there is some actual wisdom to the strategy as well. The same goes for the BTFD – Buy the Flipppin’ dip – meme.

It’s not just a meme, but a very valid strategy. But only in bull markets. It will wreck you in bear markets, as some of you may have found out.

Considering that there is now a very big chance that the bottom was in at $3100, and assuming that Bitcoin will ‘one day’ be ‘much higher’ (we are assuming this, yes? ? ) then from here on out it should be mostly upwards momentum.

FOMO’ing now will still likely wreck you though. After every major spike must come a correction of some kind. ‘The Dip’, so to speak. And we’ve had quite a spike thus far, going from $4000-ish to above $7000 now. We may go higher but the higher we go the more likely it becomes that the peak has been reached and a correction will follow.

Personally, I am waiting for the peak to be made and the following correction. The risk/reward ratio is simply off right now. The question is where the dip will bring us though. It could be anywhere, obviously. Even below $3100 is still on the table, although not likely.

Let’s look at the levels which I am looking at to buy.

The most obvious levels to me at at around $6000, at around $5000 and roughly in the $4200-4350 range. There may be additional levels to watch if Bitcoin goes much higher of course. The higher it goes, the higher the ‘higher low’ is going to be too.

Still, i think the bulls are getting tired and we may be topping out soon to start the correction. If that is the case then I believe a $6000 and $5000 retest is likely. $4200 is possible too but there is a lower chance. Judging by the current market sentiment it seems like way too many people are bullish in order for it to drop so far – lest some unforeseen disaster occurs (like Craig Wright turning out to be Satoshi Nakamoto on the 14th when he has to provide proof to a court of law in the USA).

Personally I am doing what I’ve been doing for the past months as well. I will set my buys at the levels mentioned above and will let Bitcoin decide which gets triggered. As far as I’m concerned for the next 1+ years the game has now changed to ‘Try to catch the dip’ as much as possible. Forget about new higher highs; just focus on trying to catch the higher lows instead.

I’m happy that this crypto-winter seems to be over! I’m still cautious though.

What’s kind of cool, is how my predictions were pretty accurate. About 6 months ago when capitulation occurred I called for a trend reversal in the spring/summer of 2019. I also called for the bottom to be likely at $3000.

I did get one thing wrong though. Back then I predicted a slow grind back up. Turns out it was more of a parabolic rise. Who would’ve known? Bitcoin has a mind of it’s own – Respect it or get rekt.

Still we are not out of the woods. Let’s not forget the recent bill put in front of congress about banning cryptocurrencies. Or how Craig Wright was ordered by a judge to prove possession of 1 million BTC (which would strengthen his case about being Satoshi Nakamoto). There are still multiple black swan events that could occur. But remember, it may very well be those events that provide us with the necessary dips to BTFD!

Keep calm, HODL on and enjoy the ride. You’re not a BTC veteran and if you’ve HODLed this out you’re gonna make it to the end as well.

The Sunday Recap – Down the Rabbit Hole 28

The Sunday Crypto Recap – Down the Rabbit Hole 69

Never Do What Don Conway Did

The Sunday Recap – Down the Rabbit Hole 23