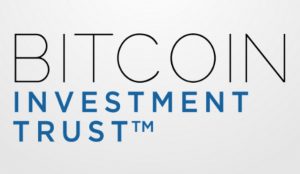 Grayscale is the company behind the Grayscale Bitcoin Trust (GBTC).  GBTC is a trust which buys and holds bitcoin and doesn’t hold any other asset.  A trust (an investment trust) is a company that owns a fixed amount of a given asset (like gold or bitcoin). Investors pool money and buy shares of the trust, owning contracts that represent ownership of the asset held by the trust.

Because GBTC is a trust, it’s not registered with the Securities and Exchange Commission), but investors can buy and sell it for tax-advantaged accounts such as IRAs, Roth IRAs and 401(k)s.

The trust’s bitcoin holdings don’t generate any income that Grayscale could use to cover those costs, so they collect an annual expense ratio of 2% to cover its costs in managing the trust.

GBTC has 245 million shares outstanding and with $2.5 billion assets under management and because it’s the only bitcoin trust out there, GBTC has consistently traded at a premium to its assets under management.  The typical premium that one can expect is between a 20-40% markup relative to the price of Bitcoin and this is why I have always hated on GBTC.  And then I came across an article that talked about the premium from a Smart Money point of view.

This premium reflects an increasingly prevalent reality, according to Ryan Alfred, President of Digital Assets Data, a cryptocurrency data provider. Most people, especially those on Wall Street, are accustomed to custodians holding their assets for them, Alfred explained.

“The premium is the amount you’re willing to pay to not custody your own private key, and still get exposure to the underlying,” Alfred said. With more than $2.6bn worth of Bitcoin under management, there are plenty of investors willing to accept the tradeoff.

However, “no institutional would pay this in any other asset-class”, said Alfred. The fact that cryptocurrency is still a fringe asset to most investors, with few alternatives, allows premiums to reach such high levels.

The BTC price has increased by $7,000 since the beginning of 2019, and GBTC share prices have grown by nearly 180%. Although premiums usually fluctuate between twenty and thirty percent, they surged to 46% above the underlying in the week following the Bitcoin boom in early April.

Here’s the correlation between the BTC price and GBTC price on the monthly chart going back to March 2017.

So with Bitcoin consolidating with some downside momentum at this time.

The chart suggests, GBTC can move down to the daily demand at $10.30.

Are You Ready For Some Football???

EOS Pump – Where art thou?