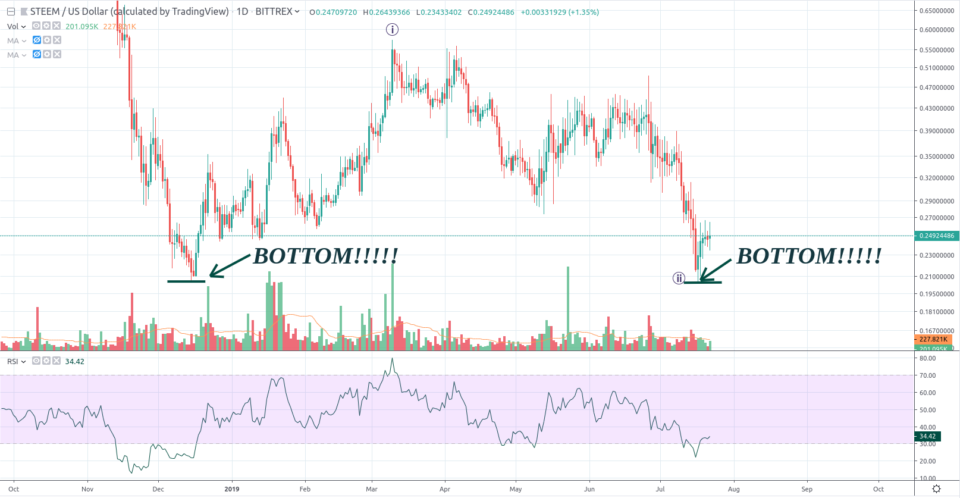 ….and it would indicate something good for the price if STEEM wouldn’t have so much selling pressure from the wales and from @steemit in particular.

A double Bottom pattern is a Bullish Pattern that usually describes a change in trend and a momentum reversal from prior leading price action. It is normally accompanied for a divergence in some of the technical indicators and this is what we see at RSI indicator on the daily chart:

… as I said, if it was any other ALTCOIN I would not have any doubt to claim BULLISH Action on it but we are talking about STEEM which is being really controlled from those that state that STEEM is a decentralized blockchain….

Will see what happens next…in the meantime, I would try to accumulate as much as possible.

Are You Still Buying The Equity Bull Market???

Superconducting Engineer working for the development of the Fusion Energy, Dad, Crypto-Enthusiast and Runner addicted. I am in a "Continuous Learning Mode" as well I am always willing to share my knowledge about the fields and topics related with trading, Cryptocurrencies, Blockchain technologies and Sports, in particular Running and Athletics.

Will Mike Novogratz Be Right This Time??? – Part 3

Ethereum and the $275 Brick Wall