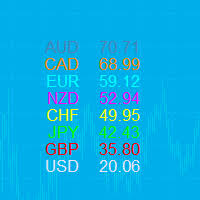 And in the foreign exchange market 90 of forex trading involves the U.S. dollar. Thus, when assessing the relative strength of the most popular currencies in the world, it’s always against the U.S. dollar, using the dailytime frame chart.

The “major” forex currency pairs are the major countries that are paired with the U.S. dollar (the nicknames of the majors are in parenthesis).

GBP/USD – British pound (Sterling or Cable) vs. the U.S. dollar

the currency relative strength relative to the US dollar is the following: