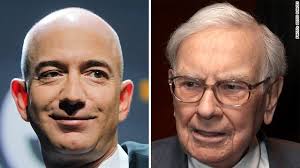 The book, The Millionaire Next Door, published 1996 and having sold more than 3 million books in essence is about living below your means and being financially responsible in order to allow your cash to work for you vs. you working for cash.

If you don’t have one of these type of neighbors to mimic, just follow what the Smart Money on Wall Street is doing.

Wealthy investors are trimming their stock positions, amid anxiety around a trade war and instability in Washington.

Members of TIGER 21, an investment club for high-net-worth individuals, reduced their stock allocation to 21% from 22% during the second quarter, according to the group’s quarterly report.

TIGER 21, a group of about 700 people with at least $10 million to invest, stands for The Investment Group for Enhanced Results in the 21st Century.

“They are concerned about the fact that the markets were priced to perfection; they thought they reached real highs,” said Michael Sonnenfeldt, founder of TIGER 21.

Warren is the greatest investors of our lifetime.  Many don’t know he made the bulk of his money selling insurance.  Yes, he owns GEICO and many other insurance companies, but I’m talking about insurance in the form of options, where he collects premium with the right to buy the asset at a later day.  For example, during the Great Recession, Buffett loaned Goldman Sachs $5 billion.   Not only did Goldman agreed to pay a 10% dividend on preferred shares to Buffett, which cost Goldman about $500 million a year, but when Buffett finally cashed in, in total, Buffett made about $1.75 billion in cash and about $1.35 billion in stock, roughly a 62% return on a five-year investment.

With stocks at record highs, Berkshire Hathaway Inc. sold $1 billion more worth of stocks than it bought last quarter, its biggest net selling since the end of 2017. The result was that the company’s cash hoard — a major focus for investors in recent years — surged to a record $122 billion.

Between July 29th and Aug. 2nd the CEO of Amazon sold 1.5 million shares, while the stock sold off 6% during that same time frame.  But Jeff is by no means hurting, he’s still the richest man in the world.  Speaking of Amazon, the stock, well it’s sitting between daily supply and demand zones.

Nestle is betting on The “Healthy Food” and “Ecology” Trends !