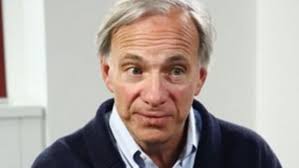 Ray Dalio is the founder, co-Chief Investment Officer and co-Chairman of Bridgewater Associates, which is a global macro investment firm and is the world’s largest hedge fund.  Ray Dalio Bloomberg is the world’s 58th wealthiest person, worth an estimated $19 billion.  Ray Dalio accumulated his wealth because he thought differently about the Markets.

While at Bridgewater Ray invented several investment strategies including: Risk Parity, Currency overlay and Portable alpha. However, the success at Bridgewater was due to Pure Alpha, which allowed Bridgewater to dabble in almost any asset class it desired, with the goal of producing a return that was uncorrelated to other markets and All Weather (commonly referred to as risk parity) which meant to be balanced across risk exposures.

Risk parity is a conceptual approach to investing which attempts to provide a lower risk and lower fee alternative to the traditional portfolio allocation of 60% stocks and 40% bonds which carries 90% of its risk in the stock portion of the portfolio. The risk parity approach attempts to equalize risk by allocating funds to a wider range of categories such as stocks, government bonds, credit-related securities and inflation hedges (including real assets, commodities, real estate and inflation-protected bonds), while maximizing gains through financial leveraging. According to Bob Prince, CIO at Bridgewater Associates, the defining parameters of a traditional risk parity portfolio are uncorrelated assets, low equity risk, and passive management.

I’m a huge fan of Ray.  Not only is he a brilliant investor, but he is a brilliant teacher as well.  Ray said there are three stages in life.  The first stage is where you are dependent on others (i.e. kid).  The second state is where other are dependent on you (i.e. parent).  The third stage is where you attempt to get those dependent on you to become independent. An example of this third stated was his 2011, self-published “Principles”, that outlines his philosophy of investment and corporate management based on a lifetime of observation, analysis and practical application through his hedge fund.

Some of those principles include:

Ray made headlines this past Friday, when an article published by the Wall Street Journal indicated his fund was putting on a $1.5 billion bet that global stock markets would drop precipitously by March 2020. In a series of Tweets, Ray responded the following:

“The Journal’s article is based on interviews with multiple sources and we stand by the conclusions we reported,” Severinghaus said in an email.

“The article does not report, as Mr. Dalio says, that Bridgewater has a ‘net’ bearish position on the stock market. The article made clear that the trade could be a hedge for the firm’s significant long exposure to equity markets, among other possibilities,” he added.

Usually where there is smoke, there is fire and I think Ray has something up his sleeves. With the Markets at all time highs, anything is possible…I guess we will find out within the next three months.

The Sunday Crypto Recap – Down the Rabbit Hole 56