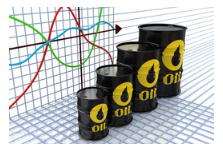 OPEC reported that output fell by almost 800,000 bpd in January to 30.81 million bpd.  On Tuesday, Saudi Energy minister Khalid al-Falih said production would fall below 10 million bpd in March, more than half a million bpd below the target it agreed to.

Meanwhile, two weeks ago the U.S. Energy Information Administration (EIA) said Record-breaking U.S. oil production is expected to continue for decades.  For example, Texas’s oil production hit a record level not seen since 1973. Texas oil wells produced more than 1.54 billion barrels of crude in 2018.  If Texas was a country production it would be the world’s third oil producer.

So the tug a war between supply and demand continues.  So where is the price of oil headed next, lets go to the charts to find out?

Since mid-January, price has been range bound and trading within a $5 range.

The best way to play oil is to day trade the extremes until oil breaks out. The chart suggests to chart oil at $55.60 and go long oil at $50.25.

Turns Out I was Right…Jamie Dimon and his Weasel Move