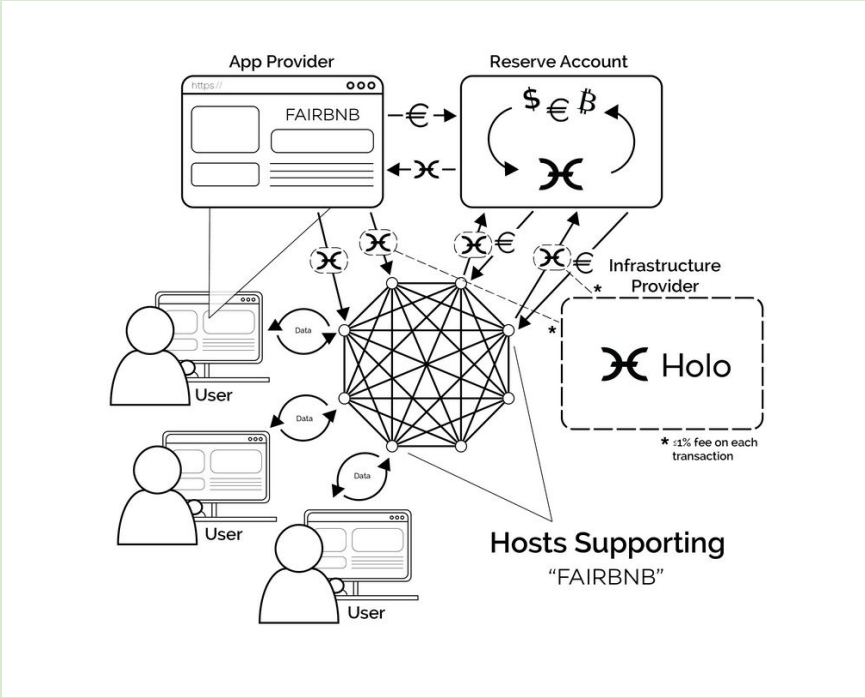 Welcome to the fourth and final part of my series on Holochain from the Trybe Holochain competition. In case you missed them, you can catch up on Parts 1, 2 & 3 here:

Today we wrap up by looking at all the other aspects of Holochain which we haven’t covered yet, including the all important performance of the cryptocurrency itself. I’ll also sum it up in a conclusion, but before we start all that, I’ll begin with the most important thing to look at when analysing any crypto…

The most important task when researching any crypto

I’m now going to let you in on a big Bit Brain secret. There is one thing I always do when researching a cryptocurrency. I consider it to be the single most important aspect of my research. Good news: it’s quick and easy!

Quickly go to this page and see what your first impression is: https://holo.host/team/

Your brain is a magnificent machine designed to guide you and protect you from harm. In it are sets of filters, constantly refined and updated by new information. When you look at something, anything, your brain will tell you that it’s either “dangerous”, “safe” or “er, I’m not too sure”.

This applies, among other things, to when you see people. Like it or not, we judge people by how they look. While there are many exceptions to this rule, you CAN decide just by looking at someone whether they are trustworthy or not:

The same applies to crypto. I look at the team members photographs, especially the main members, and ask myself the question: “Would I be happy to give this person XXXX dollars of my own money to look after for me?”

If the answer is “er, I’m not to sure” – then I proceed very carefully or look for a better option.

If the answer is “no” – then I run away and never look back.

This method has a 90%+ success rating, I kid you not. I’ve ignored it before and paid the price (no names mentioned, *cough!* *cough!* Electroneum *cough!*). These days I don’t ignore it.

For what it’s worth I was impressed by the overall look of the Holochain team. To me they looked genuine (as if they believe what they are saying), down to Earth and trustworthy. I would be willing to invest with people who look like that, despite a questionable hairstyle or two! ?

[Exceptions to the rule: don’t worry if you’re researching a cryptocurrency and any of the software developers look a little strange – that’s perfectly normal for them because they hardly ever get exposed to sunlight or social situations.]

This article is obviously based largely on fundamentals and not Technical Analysis, I’m going to keep it that way. But the HOT charts are worth sharing because they are very impressive! Despite first appearing on CoinMarketCap on 1 May 2018 (that’s deep behind enemy lines in bear market territory) HOT has performed exceptionally well! Both the BTC and USD value of HOT have CLIMBED between then and now – almost unheard of during this period! It isn’t all attributable to sudden hype events either, which makes it far more sustainable. CoinGecko also lists HOT and its charts actually go back one day further, painting an even brighter picture of HOT performance so far!

From a purely TA perspective I would expect HOT to drop steadily in price for the next month or two before it stabilises and starts picking up again. This is fine and is perfectly normal after a climb such as the one experienced in late January.

UPDATE SINCE THIS WAS FIRST PUBLISHED ON TRYBE: Holo has been continuing to drop in price as I predicted (of course it would – I’m Bit Brain). I’ll be looking to take a position in it around May/June.

If you’re looking at buying HOT you can find it on a wide array of exchanges, my favourite of which is Binance.

WARNING: Be careful! HOT is also the ticker symbol of “Hydro Protocol”, don’t confuse the two and buy something you hadn’t intended to! I’m not saying that there is anything wrong with Hydro Protocol, just that it isn’t Holochain. There is also an unrelated cryptocurrency called HOTchain available on a few exchanges.

Holochain in a nutshell

Holochain is a platform/builder crypto, but one with discernible differences, which may just be enough to give it an edge over the competition!

Does this mean that it’s better than the competition and will replace blockchain technology?

No. Of course not.

“Better” is a relative term, and what is better for one thing may not necessarily be better for another.

Blockchains are good for some things, Holochain will be good for others. Bitcoin isn’t about to become obsolete overnight, Holochain is not a threat to it. Take a look at this excellent article series which explains why the best technology is not necessarily going to be the dominant technology:

Important fact that I haven’t mentioned yet: Holo is not designed for anonymous operation. It’s not what you want to use for the transmission of secret data. It’s not designed to hide your transaction history. Stick to PIVX, Monero, ZCash, Dash etc if secretly moving crypto around is what you require (or Verge if you’re really desperate ).

One final interesting tidbit before I cease bombarding you with Holochain information:

Holochain is not entirely a standalone entity. It’s a part of something bigger called Ceptr. Without derailing my article by branching out too wide: Ceptr is a global move towards building a better world by revolutionising computer networks. Holochain is an integral part of that. See http://ceptr.org for details.

Reality Check (before you go all-in on Holochain):

I once participated in the ICO of a cryptocurrency called Envion (EVN). It looked fantastic! A renewable-energy powered crypto mining coin that both pays dividends and reinvests in itself to keep updating mining hardware and growing your investment. I really did my homework, researching each and every aspect of it, making projections, verifying the backgrounds of team members. I was sure that I was onto a winner. After it listed on exchanges I bought it over and over again, more times than any other crypto I’ve bought to date.

Then along came the CEO (Matthias Woestmann) and his two lawyer friends with an elaborate plan to issue extra tokens, dilute the holdings of the Envion founders and to run away with the ICO money (the sixth largest ICO ever at the time). Their plan worked. After much fighting, both in and out of court, Envion lay in tatters. The courts decided to liquidate it – handing Woestmann and his lawyers the victory and leaving token holders stranded.

My message is that many things look good on paper, but fail in practice – no matter how thoroughly you did your research on them! Woestmann was a respected businessman and head of a German investment firm. He had connections to affordable renewable energy. Envion was incorporated in Switzerland and even registered with the American SEC (because it was going to pay out mining profits as dividends). None of that helped, despite numerous attempts by the founders to save Envion – it collapsed and I was eventually forced to sell all my EVN (the noble founders never did give up the fight – good for them).

I’m not saying that about Holochain – not for one second. I am saying is that anything can happen in crypto and that you shouldn’t count your chickens before they hatch.Don’t put all your eggs in one basket. Let me stop before another proverb inadvertently slips out.

This has been an education, probably even more so for me the researcher/writer than for you the reader. I consider it to be time well spent. Remember that I’m not an old Holochain fan, I haven’t followed the project since the beginning. For that reason I may have misunderstood something, left something important out or gotten something just plain wrong. If that is the case then I apologise.

Despite the length of this article, you can see that I have left a lot of information out. You could spend hours reading up about Ceptr alone, or Junto, or Holo fuel – I leave that up to you, you have the foundation to do that now if you so wish.

Overall I consider Holochain to be a crypto which has a good chance of success. Whether every facet of it will work or not, I don’t know, I told you my doubts about Junto.  So far I have indeed been suitably impressed by what I’ve seen.  That doesn’t mean that I’m not about to go and sell all my beloved NEO for it…

Would Bit Brain be happy to invest in Holochain?  – Yes, he would.

Is Bit Brain going to invest in Holochain? – Do you know something? He probably is!

And that’s the highest praise which I could possibly give any fledgeling cryptocurrency.

Yours in blockchainless crypto
Bit Brain

Originally published on Trybe at: https://trybe.one/bit-brains-not-so-little-guide-to-holochain/

My thanks to the Trybe team for hosting the Holochain blogging competition, without which this article would probably never have been written.