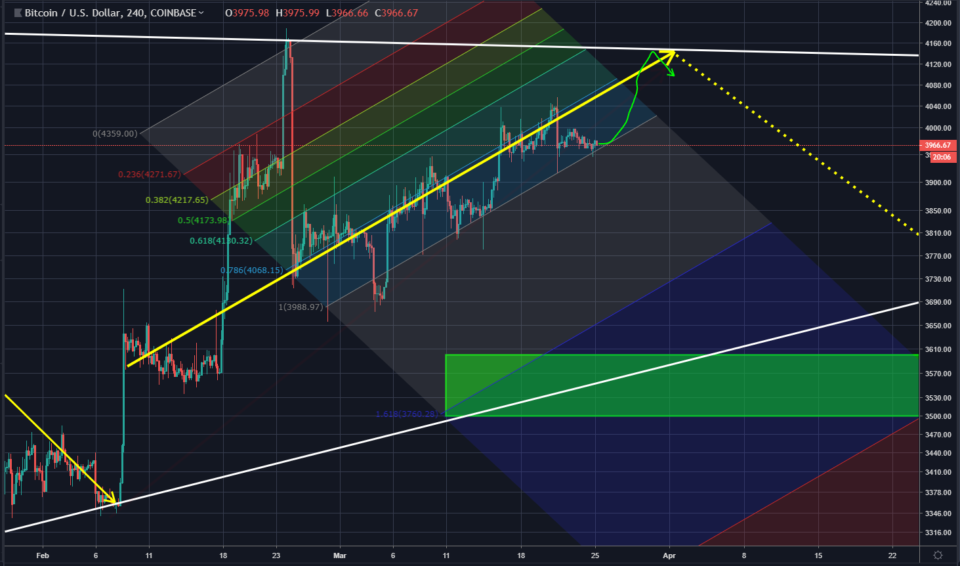 A week ago I spoke about holding off my March BTC buy a little longer. So far this looks like a bad decision on my part (and is why one should always DYOR and never follow someone’s suggestions blindly – even when that someone is me!). I suggested this BTC price movement (seen below) – which has not happened. The false peak of late February caught me out and threw my analysis.

Fortunately I knew that I may be making a mistake at the time (so I wasn’t completely wrong) – and planned a contingency analysis scenario. In that same post I also published this idea (below) – where the backup projected price movement is indicated by the red arrow. That has happened.

As of right now it looks like this: (incorrect/old projections in yellow, correct/new ones in red):

I am therefore revising my BTC projection to look like this:

I have tweaked my diagonal Fib levels slightly, but they remain basically unchanged. BTC is approaching a major level today, it can either break through that level and drop in price, or it will run parallel to the level and reach the top of the large converging triangle.

Looking at recent price movements, I consider it more likely that BTC will climb in price yet again, and then jump upwards towards around $4150 before finally starting to decrease in price thereafter.

I believe that the most likely movement of BTC price over the next few days is as indicated by the thin yellow arrow on the chart below. I place a probability of 45% of that price movement, with a probability of 30% on the scenario that BTC breaks through the diagonal Fib level at its current price and then drops rapidly.

In either event, once BTC does drop in price, I expect it to find major support in the $3600 – $3700 region, the later it drops, the higher up it should find support.

On a personal note: I still really need to buy BTC before the end of this month (for reasons not related to this post).  That leaves me in a particularly tricky predicament. Time and again it has been shown to me that it’s better to just buy BTC as soon as you intend to, and not to attempt to time the markets. I have yet to learn that lesson – I wonder how many more times I will have to bump my head before I do.

Oh well, whatever happens, I console myself with the fact that any BTC bought for less than $10000 is an absolute steal. In the long-term a few hundred dollars price difference really doesn’t matter much!

Bull market confirmed – From now on it is time to BTFD!

Is PewDiePie Going to Ignite the Migration?