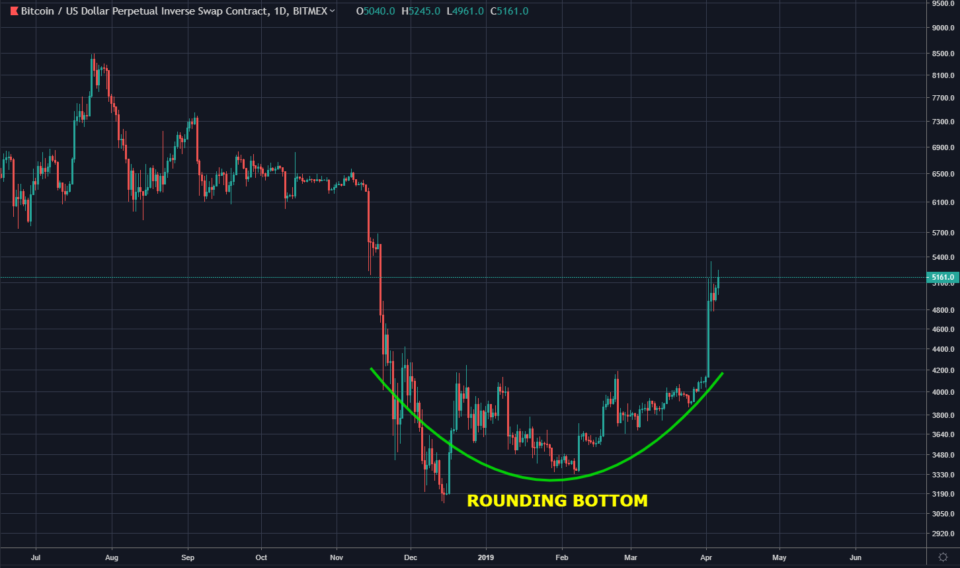 Diagonal Fib levels continue to hold true as BTC fluctuates around the $5000 price level. Those levels have held for over two months as BTC has been climbing in price. Hindsight shows that they could have been used even earlier, though determining the correct angle at that stage would have been near impossible. I will continue to use them frequently for as long as they hold true.

The chart below shows the bigger picture of diagonal Fib levels in 2019:

For now the price of Bitcoin remains trapped between the 1.0 and 0.786 levels. More detail is seen on the chart below:

BTC has just been rejected by resistance at $5188 (Coinbase) which coincides with the 1.0 Diagonal Fib level. This is the same level which BTC briefly broke three days ago, but was unable to sustain due to the rapidness of that initial climb. “In Bitcoin – implications of the rise” I showed that BTC had climbed beyond the limits of the Bollinger Bands and explained that:

BTC will have to drop in price to get back into the bands, but that should only take a day or two or three. After that, BTC is free to continue its climb.

Since then it has moved back within the bands and is now free to continue climbing, as it has just attempted.

Market sentiment is difficult to read at the moment. On the one hand BTC has just proven how ready it is to run. The grossly oversold position could never have remained indefinitely and a breakout was on the cards, even if it did begin a little sooner than expected. It is still my opinion that we are in a sideways movement phase and that a small drop is likely in the near future. Volumes have dropped significantly, through that is somewhat a moot point because they are still much higher than they were before the climb of 2 April. It’s worth repeating that crypto set new all time high volume records this week!

So there is clearly enough positive sentiment (and money) in the market to keep the climb going. I consider it a strong possibility that Bitcoin will climb back up to just over $6000 in the short-term; the level it was at before it capitulated in November. Whether it now goes up to that level or drops back down a little is dependent on how nervous traders become. I think that the market is still to scared to reach $6000 at this stage, but it is very possible. Were I to assign probabilities to these scenarios then I would say:

Remember that these are short-term scenarios which I am talking about.

Looking at the bigger pattern I am now convinced that I was correct on 19 December when I published this in a post:

I think that it is plausible that Bitcoin (and by extension cryptocurrencies – true throughout the rest of this post too) may possibly be in the process of creating the rather rare reversal pattern known as a “Rounding Bottom”. A Rounding Bottom would look something like the yellow/green line from this chart: (from this post last Friday)

Because it is a relatively unfamiliar pattern, here is a link to the Investopedia article on it. Give it a quick read and tell me what you think of this possibility: https://www.investopedia.com/terms/r/roundingbottom.asp

I would definitely say the the current BTC chart shows a Rounding bottom (a reversal pattern). Click the Investopedia link in the quote above to find out more about this relatively rare pattern.

It also shows, once again, that you should pay careful attention to Bit Brain’s forecasts – I called that WAY before anybody else did, the first time I saw somebody else suggest a rounding bottom was only this month – 3.5 months after my call.

I’m still expecting a capitulation event – for now. I’m open to the possibility of there not being one and that it isn’t necessary for the market to have one. I think it is possible that a “soft” capitulation may already have occurred.

Which just about nobody else was saying in December.

The Sunday Recap – Down the Rabbit Hole 23

BITCOIN: No more historical resistance till…