This marks the 2nd post of the ‘Three Reasons’ series. The posts will alternate – a bullish outlook for a particular blockchain project followed by a bearish. Three is an estimate of convenience only.  These posts are intended to be brief expressions of my opinion on particular cryptocurrencies and are not exhaustive in detail.

Aside perhaps for Bitcoin Cash, few other crypto projects are as mired in controversy and competing camps as XRP. The entrenched divide between those who revile and those who embrace the XRP narrative has served to muddy the waters for any attempted analysis. Those on either side of the divide tend to write-off any conclusions which differ from their own. While this is symptomatic of the crypto space in general, it is particularly evident in regards to XRP.

To be clear, I have no sectarian interest in the long-term success or failure of XRP. I completely reject the childlike notion of the ‘single’ outcome. That one crypto’s adoption is inherently bad for all the others. This is a fool’s narrative and should be seen as such. As an investor XRP’s success or failure is of no emotional value to me. I have a preference for decentralised solutions but recognise that crypto’s future iterations will not be binary or single layered – there’s room for every shade of governance and degree of autonomy.

All points made here are looking at XRP from a long-term perspective ie. XRP as a value proposition over a multi-year horizon. Short-term returns are entirely possible and ultimately irrelevant to the points made below.

The key and indeed only narrative for XRP is that it on the cusp of becoming the banker’s coin (though Digital Asset Exchanges are also touted). The story runs along the lines of, well, for now, banks are just going to use our tech but in time they will implement XRP into their remittance services. Now, this doesn’t quite add up. First and foremost – why would banks choose to cede their current market dominance to an outside, privately owned player? Claims to current bank integration are overstated. Sure, they want in on blockchain technology (as they have no choice) but banks are much more likely to opt for an in-house solution than to hand the keys over to non-banking industry entity.

Granted, a minor bank here or there may use XRP. Many may trial it – they may even use it as an interim solution but long-term they are much more likely to develop and deploy their own systems such as Quorum developed by JP Morgan (in partnership with a range of banks).

The supply of XRP is epic and eventually will reach 100 billion of which over 41 billion is currently in the market. A billion XRP is released into the market every month. I repeat every month – a billion. To be fair this is the amount of XRP offered to the market by Ripple each month,  any unsold XRP is rolled back into eschrow to be re-released 55 months later. Nonetheless, that’s a lot of downward price pressure wouldn’t you say? The current valuation of around $0.30 has a lot of future supply to contend with. This is a key aspect of my bearish sentiment for the coin – even with a degree of adoption the supply will suppress the price – there’s too much XRP chasing too little revenue. While it’s true that unsophistacted retail investors may misconstrue XRP as cheap seeing only the per token pricetag – institutional money certainly will not.

The Central Point of Failure

XRP is Ripple the company. XRP lives and dies on the whim of a single entity. They control the majority of the supply, and the infrastructure of the coin. XRP needs Ripple a lot more than Ripple needs XRP. True the company sells XRP to raise funds but the tech products of the company do not fundamentally require the coin. Thus, Ripple, the company may divest itself from XRP the coin as and when it suits them. To put in another way, XRP is a product from a range of products released by Ripple and can be removed from the product line.

What you’re left with is a single use case coin with a centralised system that isn’t even required by that system. Could XRP become the banker’s coin–sure, is that probable – no, no it’s not.

A broad retail base speculating on a token that’s not inherently designed for retail use. The holders aren’t the target users.

The returns on XRP have already been spectacular, Jan. 1st 2017 it was valued at just over half a cent. It’s a got a long way to fall before any reasonable assessment as oversold.

These are entirely subjective observations. Do your own research and reflect on your own circumstances and realistic tolerance for risk. 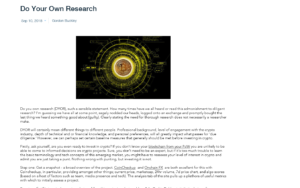 Do Your Own Research

Always remain skeptical. Rather than simply accept or reject the thesis of this post – look into it and come to your own conclusions.

Ripple – we need to talk

Life and Times of an Honest Business Man: No Good Deed Unpunished