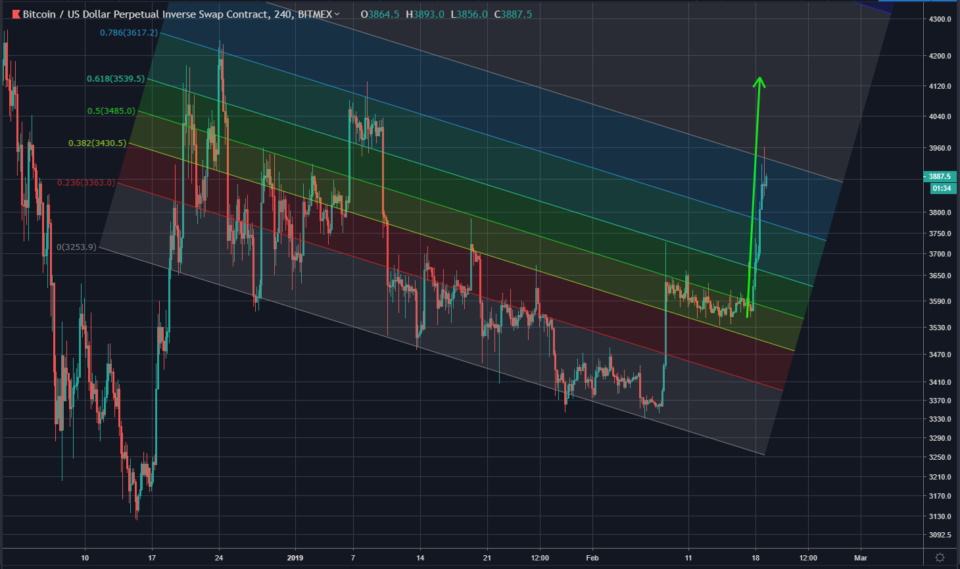 With the rapid spike in crypto prices, it’s my job to attempt to predict the next move in the markets. I’m attempting that by means of Fib analysis.

Let’s start with my previous prediction:

On 10 Feb I wrote this post – also about BTC Fib levels (as you can probably tell from the title!): Bitcoin – Fib levels. In that post I predicted price drops to previous levels – on charts such as this one:

or even this one for capitulation events:

…but knowing crypto like I do: I included these clauses:

“After looking at various support levels that BTC may drop to, I decided to do the reverse: see where it might meet resistance if price climbs. I doubt that this will happen soon, but there is always a chance.”

It’s a good thing that I did!

That arrow in the chart above has not been moved – look at it today:

Not bad, but I have to admit that the timing was purely a thumb-suck, so I take no credit for it.

What I have done since then is to move the Fib levels. Not “move” per se, but rather to “fine tuned” with the new data available. I believe that the chart directly above is reflective of the latest short to medium-term Fib levels in play.

Zooming out we can see that if the price of Bitcoin continues to rise, then it should meet resistance at roughly $4000, $4500 and $5250 – depending on the exchange used and the timing of the rises.

This is a short to medium-term plot and I’m using a logarithmic scale. In the short-term it is possibly better to use a linear scale, in which case the resistance levels will appear at around $4250 and $4850. It depends on how rapidly the growth takes place – or even if it takes place at all. See the chart below.

I honestly can’t say which is more correct at this stage, it’s one of those tricky sitting-on-the-fence situations. Either way the next resistance level is close to being broken down and is certainly under threat.

Of great interest to us is that the volume increase has been substantial in the crypto market. What’s more: so far it has sustained itself. Whether this will remain that way is doubtful; but as long as volume remains higher, prices should continue to rise. If you look at the Total Market Cap chart on CMC you can clearly observe the sustained volume increase over the last few days: (The period Feb 15 – 19 is shown on the chart below)

$4000 is a psychological barrier and will provide resistance no matter if it corresponds with Fib levels or not. Current market sentiment is positive and can drive prices up as long as it stays that way. Sooner or later that positivity will turn to doubt and prices will drop again – that may be minutes away, or it may be months away.

With the market having been so heavily oversold such a price rise should have been expected and is perfectly sustainable. There is no specific need for BTC price to fall back to the low $3000s (or less) – at least not from a fundamental perspective. Having said that, I would expect to return to the mid-$3000s soon, though my certainly factor at this stage is low due to the unpredictable nature of market sentiment. I’m still not expecting a major bull run until around early July.

All charts made by Bit Brain with TradingView unless stated otherwise.

Bitcoin: More Price Changes, The More It Stays the Same

Is This The Beginning Of Alt Coin Season???