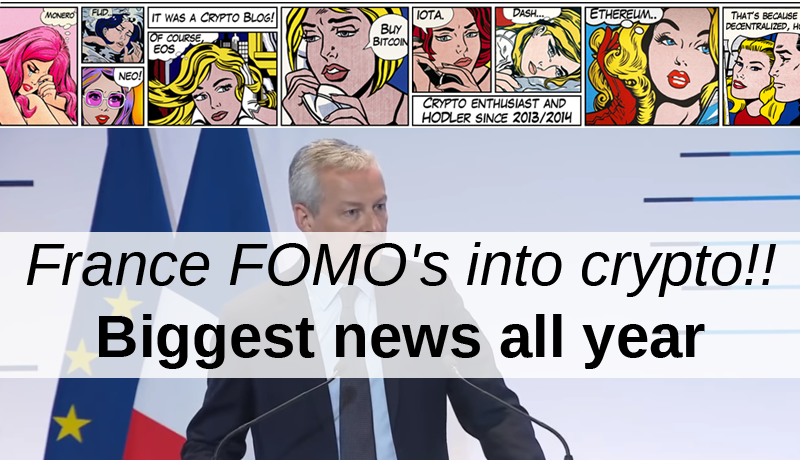 French Minister of Economy and Finance Bruno Le Maire is going all-in into blockchain. At the opening of the Paris Blockchain Week he disclosed that he is a great believer in the technology and wants to make France a global leader in it. The French government wants to create a blockchain-friendly ecosystem and is going to actively work on stimulating the sector domestically. Le Maire also called on other international leaders to follow in France’s suit.

France is the first big nation to FOMO in!

His speech today was covered by some media, but nobody seems to have taken the time to actually translate what Bruno Le Maire was saying. The French Minister of Economy and Finance turns out to be a MEGA-BULL when it comes to blockchain!

He says he believes firmly in blockchain and that it is not just a technological revolution but a democratic one too. The way that blockchain can flatten hierarchical structures is of great interest to him because of the freedom and democratic benefits it brings to citizens and consumers.

He mentions that it’s not just about finances, but also about logistics in the food industry and farming sector, among others.

He further goes on to say that “The [blockchain] revolution has already begun” and if that is the case then France wants to be at the forefront of it instead of lagging behind.

So France is going all-in on blockchain and Le Maire expressed a desire to make France the global leader in blockchain. To accomplish this the French government will actively try to create a blockchain friendly ecosystem without any of the hurdles that the blockchain-industry currently faces. That includes clear and friendly regulations, to which he points to the recent crypto-laws that allow French insurance companies to invest directly in crypto.

Furthermore, the state will invest as much as €4.5 billion euros in the next five years for innovative projects such as blockchain.

Additionaly the government will create a crypto-whitelist to which companies can opt to be placed on. It is not mandatory but it serves as a way of showing which projects are OK’ed by the government. Projects not on the whitelist are not hindered in any way.

Lastly, he calls upon his colleagues in the EU and internationally to follow France’s model and come together to form international guidelines inspired by the French model.

Make no mistake: This is absolutely huge!!!

This is basically a huge thumbs-up from one of the biggest economies of the world and one of the major ones in the EU. Le Maire makes it clear in his speech that he has every intent of making sure blockchain is stimulated so it can further develop.

It is a giant endorsement and ALLIANCE with the direct leader of the French economy. He has the crypto-bug!!

This will have a huge effect on the EU decisionmaking and policy as well. France is likely to exert a very positive influence on the rest of the EU countries. And with France FOMO’ing in first, how long is it going to take before the FOMO strikes every other nation as well?

Blockchain is real and it’s here to stay. We even have the French Minister of Economy on our side! ✊

You can watch the speech too (here), but it’s in French. That’s probably why you haven’t heard of all of this yet! The news outlets seem to be too lazy to try and understand it. Luckily, Youtube has an in-built mechanism for autotranslating the speech. It sucks pretty bad, but you can make out what he’s saying pretty well if you pay a little attention. Have a look/listen!!

At the limit of the Market sustainability