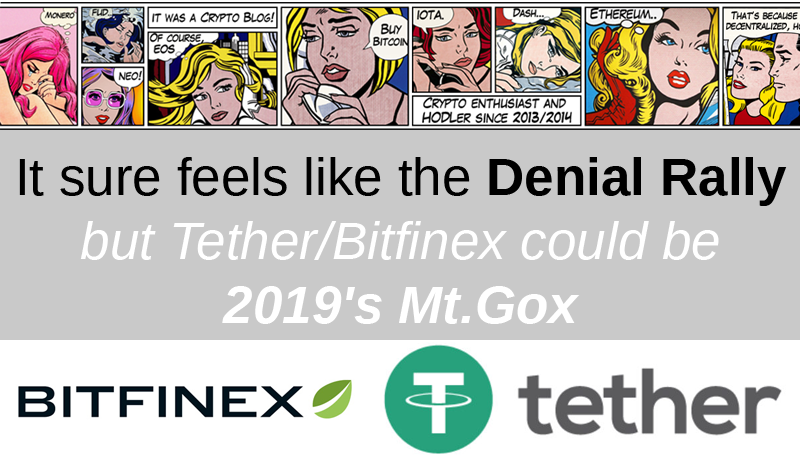 Having suffered through a crypto-winter before this one, I feel it gives me some perspective. Technical analysis will get you so far, but I’ve learned that the market sentiment is a great indicator as well. From what I can tell the current market sentiment is very much along the lines of the ‘Denial stage’ of the market cycle. Still, with a Tether implosion looming on the horizon it makes one wonder if history really does rhyme..

Judging when capitulation is over and the Denial/Hope rally starts is one of the hardest things when it comes to investing. By definition the market will fool the most people at this stage, when you think about it. It simply can’t be a denial rally unless everybody is in fact in denial – or to put it otherwise: they don’t believe it’s going up.

It certainly seems to be the sentiment right now. Many analysts are shifting over to believing the bottom is in, but still expect a significant drop to the downside. Some others like Tone Vays expect the bottom isn’t in by a long shot. It would seem like these are the perfect conditions to fool the majority of predictions.

Fundamentals are no joke

Underneath Bitcoin and crypto is stronger than ever. Most sellers are out of the market, the tech is improving, transactions are as high as ever, adoption increases and an increasing number of countries are declaring themselves pro-crypto. An ETF and institutional custodian and trading services with Bakkt, ErisX and Fidelity is around the corner.

North-Korea amassed almost a billion worth of crypto through hacks. Argentina has started to slowly acquire crypto. Venezuela, though negative on Bitcoin, is positive on crypto. Iran is looking into crypto. Putin is pressuring the state duma to create regulations. Paraguay is building a mega mining farm next to a hydroplant to get out of poverty. Belarus has announced a mega-mining farm.

Everywhere you look there is crypto. It is not hard to see that crypto isn’t going anywhere and adoption is only going to increase. It is pretty plain to see, for anyone who’s paying attention, that we’re on the cusp of something big.

And if it’s true that we are on the cusp of something big – it certainly seems this way – then one must start weighing the risk of not being onboard the train when it leaves.

There may be further downside to the price of Bitcoin and crypto, that is true. Perhaps it is a matter of 50/50 based on technical analysis, at this point. But, 50% also means that there is a 50% chance of missing the train when it leaves. It may not be wise to incur such a big risk to wait for a better deal if it could mean missing the next wave entirely.

Most smart people I know have been accummulating for a while because of this. It makes more sense to just buy when it’s generally low, than to wait for an absolute bottom. I think more and more people might start realizing that there is an opportunity cost to waiting longer. Especially with such strong fundamentals coming into play.

When everything seems so sure, it’s easy to forget how quickly it can all go to hell as well. Foregoing the everpresent danger of a complete crypto and Bitcoin-ban from governments, there is a significant risk of a Tether implosion destroying the economy.

Most people who have been following the news know of the regular Tether FUD that comes along (Load ze Tether FUD, Lord Bogdanoff). It’s usually the same, over and over and to most people it’s old news. Still, it takes a while for law enforcement to catch up. When it does finally air that Tether and Bitfinex aren’t fully solvent and have been printing fake-Tethers to prop up the Bitcoin price, it’s going to have an effect – even if everybody ‘in’ the market already knew.

I’m not sure what would happen precisely if it turned out to be the case. One one hand it means that most of Bitcoin’s price has been pumped up with non-existing dollars. That could cause a massive sell-off bringing us way below $3000 at this stage in the market.

On the other hand people will be fleeing Tether en masse. Right now Tether is the most dominant stablecoin in the market at about 98% market share. The BTC/USDT market is the biggest one around, doing about 9 million BTC a month. Compared to the actual USD market, which does less than 1 million BTC a month. All of this economic activity will flee into other markets – because presumably it is not able to enter the USD market easily.

That could create a massive demand for BTC and other crypto’s. It may be short lived though, as people use it to exit the market entirely as an intermediary step.

Of course, Tether and Bitfinex say that everything is okay. The New York state lawsuit is overblown according to them. Bloomberg seems to agree. It’s hard to tell from the outside. It would be nice if Tether was solvent. But with so much smoke, over so many years, surely there must be some fire?

Right now my strategy is to keep slowly accumulating and dollar-cost-averaging. Emphasis on slowly. This is a game of patience. In case of a repeat of history, if Tether Goxxes the space for another two years, it’s best to still have some room to wiggle.