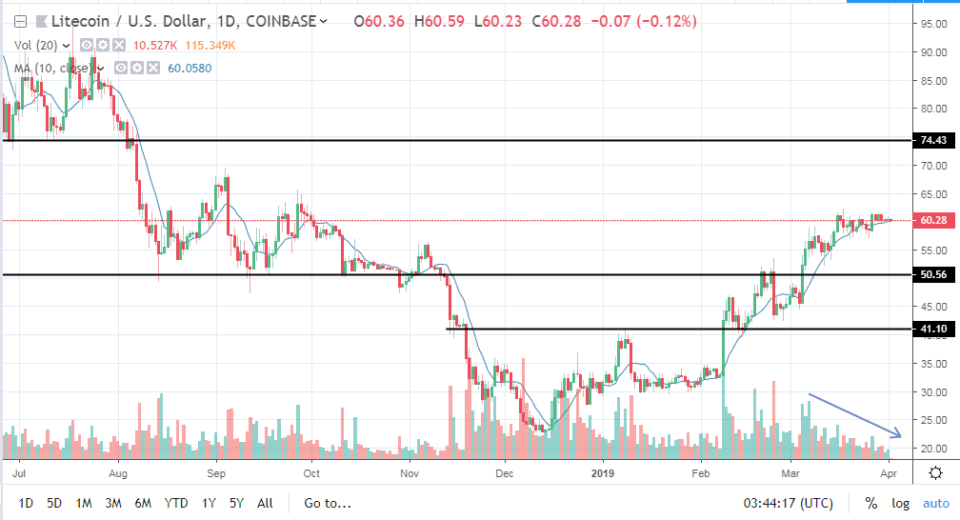 Looking at the litecoin chart a couple of things jumped out at me.

1.) The Declining Volume for the Month of March

2.) It consolidating sideways around $60, which is where it ran out of steam after the last move up.

Looking at the chart in this post you can see I noted the volume on the bottom right side of the chart with an arrow.

See how it has been drying up as March went on?

I’m not saying that is necessarily a bad thing, in fact I don’t mind at all that we are consolidating on light volume.  Sometimes that just means the prior move is being digested.

With BTC creeping up near a key resistance level and LTC grinding along sideways it is just a matter of time until something happens.

It is most likely one of two possible things.  The coins catch a bid and some volume buyers break these coins higher or the sellers come in and smack them back toward the bottom of their respective ranges.

Either way, an uptick in volume is due at any time after this period of light volume.

So saddle up people, it may be time to ride soon!

The Writing is on the Wall Folks. It is all Starting to Break Up $XMR $ZEC $BTC

The Sunday Crypto Recap -Down the Rabbit Hole 40