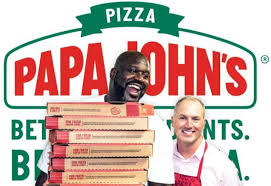 A little less than a year ago, John Schnatter, the founder and former public face of pizza chain Papa John’s stuck his nose in the national anthem protests debate in the NFL, then indirectly blamed the league for Papa John’s slowing sales. Than in during a May conference call in 2018, Schnatter was asked how he would distance himself from racist groups online. He responded by downplaying the significance of his NFL statement. “Colonel Sanders called blacks n—–s,” Schnatter said, before complaining that Sanders never faced public backlash.

A month later John Schnatter appeared in court to testify against the Papa John’s board stating that the board didn’t back him in clarifying controversial comments he made about the NFL.

Schnatter eventually resigned and the company went on to spend between $30 million and $50 million the rest of the year on costs related to the scandal, including removing Schnatter from marketing materials and ads and legal costs.

It was a real public relations nightmare and I’m sure will be a new case study in many Business Schools curriculum on what not to do in business.

It’s now 2019 and now Papa John’s has a promoter, Shaquille O’Neal.  Not only is Shaq the new face of Papa John’s, but he is now also the newest board member.

Over the years, the four-time NBA champ has endorsed a wide range of products and services.  The one in recent memories is Ring.  When he bought a new home in Atlanta bought a security company quoted him $40,000 for a system which included cameras.  That price was absurd to Shaq, so he bought a Ring doorbell camera for $300 and loved it.  So he called up the Ring CEO, told him he loved the product and asked him if he needed up.

Shaq bought an equity stake (and got paid when Amazon bought Ring) and started appearing in Ring commercials.  It was Shaq that made Ring a household name.

But Shaq isn’t only a pitchman, he’s a business man as well. He currently owns a Krispy Kreme Doughnuts franchise in Atlanta, along with Big Chicken, a fast casual fried chicken concept in Las Vegas, and a fine dining restaurant in Los Angeles, Shaquille’s.  And now he will had Papa John’s to the list.

O’Neal will be featured in commercials as an ambassador for the Papa John’s brand, according to the agreement. He will also serve as an active investor in nine Papa John’s franchises in Atlanta where he is employed by WarnerMedia Entertainment

“Papa John’s is building a better culture, and I want to be a part of improving the company from the inside out,” O’Neal said. “I am excited to be able to help Papa John’s raise its game to new heights.”

Can Shaq win a championship with Papa John’s?  Time will tell, but he is off to a great start because during the announcement last Friday the stock closed the day up 6%.  But will the enthusiasm last, lets go to the charts to find out.

On the monthly chart, Papa John’s stock price is still in a downtrend.

However, on the daily chart, the chart suggests that price has room to move to the daily supply at $65.

US retailers trump Warren Buffett with push into own brand

$HACK continues to show resilience! It is a No Brainer! ?