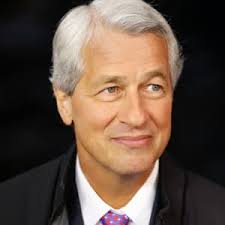 Eight months ago, JPMorgan Chase & Co. Chief Executive Officer Jamie Dimon said that the likelihood of the 10-year U.S. Treasury yield reaching 5 percent was “a higher probability than most people think.” Presumably, that was based on solid economic growth and further interest-rate increases from the Federal Reserve and other central banks.

But it’s nevertheless noteworthy to see him backtrack now that 10-year yields have dropped to 2.5 percent and a much-watched portion of the curve has inverted for the first time since before the last recession.
From his letter:

“10-year bond spreads have been suppressed in some way by the extreme quantitative easing around the world. If that ever reverses in a material way, how could it not have an effect on the 10-year bond?”

However, Jamie was wrong, at least to this point because after reaching a high of 3.255% in October, the 10 yr note yield has pull back back.

But I was wrong too. Back at the beginning of 2018, I wrote a post titled,

Timing The Next Stock Market Crash

I anticipate the yield going above the upper channel this time. If the yield on the 10 year bond reaches 3.5% – 4.0%, the market may crash sooner than the 20-30 month target.

I’m not going to sit up here and make excuses, but we had a fundamental change in policy as the yield moved above 3%.


During a question-and-answer session Oct. 3, Fed Chairman Jerome Powell said the central bank was a long way from adopting a neutral rate of growth. The Markets didn’t like what Powell said and showed him by tanking.

Then in December, Powell said the Fed’s program to reduce the bond holdings on its balance sheet was on “autopilot.” Powell later went on and raised short-term rates another one-quarter percent. The Markets didn’t like what Powell said and showed him by tanking again.

In early January, during a round table with Janet Yellen and Ben Bernanke, Powell said, there is no preset path for raising rates or adjusting the balance sheet. The Markets like what he had to say, eventually climbing 10%.

Then, during the FOMC meeting in February, Powell said the case for raising rates has weakened somewhat. In addition, Powell made it very clear to the Markets and used the word “patient” eight times in his speech regarding hiking interest rates. The Markets like what he had to say and all the US equity markets rose between 1-2% for the day.

Ethereum Breaking Out on No Volume, Meh.

The FOMO is Real in Real Estate

Marijuana…There’s An ETF For That

Wow, I never watch this market, but from those charts you've shown those T-bonds certainly look ready to plummet!