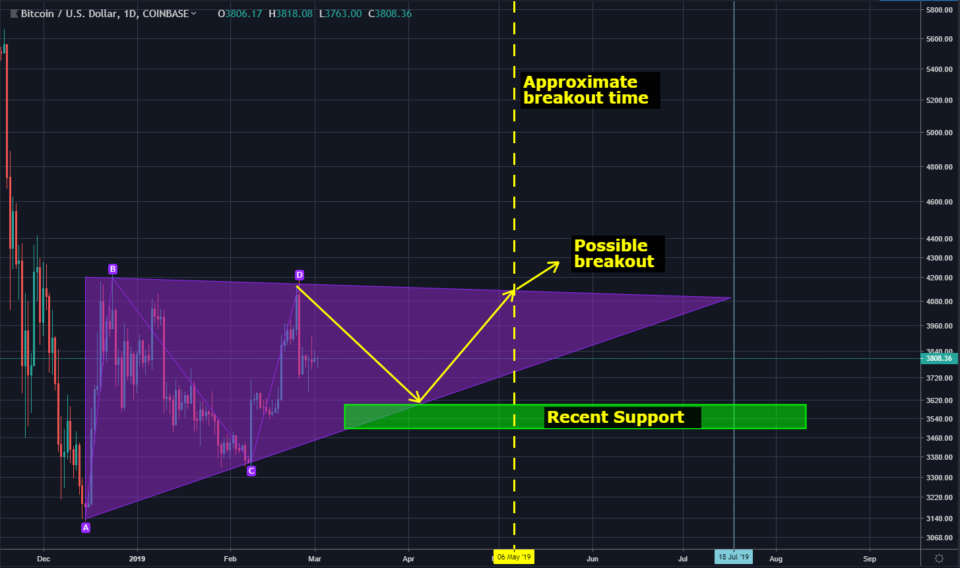 Old age is difficult. I went to my PC to type my blog post – topic firmly in mind. After finally catching up on all recent post comments, other interesting posts and typing a few replies… … I had no idea what my topic was anymore. Fortunately I keep a long list of “topics I will one day get to” – so I opened up my list and picked one. As I was about to start typing, I glanced at the BTC chart and noticed something I hadn’t noticed before. One more topic change later and here we are! Today we are looking at BTC because of that thing I noticed…

I’ve got quite a few charts for you, I’ll walk you through my reasoning process as we go along – so let’s get straight to that.

This is the chart I was looking at when I noticed something. Notice anything?

This is what I see when I look at that chart; the start of a classic ascending triangle:

The next step was to zoom in (I switched from daily to 4-hour candles) and fine tune the upper and lower limits to the best possible levels.

The end result is clearly a tapering triangle of the ascending variety. This is a bullish pattern. This triangle reaches its apex on 18 July, meaning that a breakout is likely before that date.

I created a proper triangle and overlaid lines of equal time duration on it to subdivide it into three equal sections. I did this to get a better idea of the potential breakout time, since breakouts generally occur in the final third of a tapering triangle.

A look at the BTC volume profile shows that $3600 has been a price level where trading volume has been high during the last month and a half. $3600-$3500 should therefore provide support.

We now have a time when our breakout may start, a support level and a probable latest time for our breakout.

It is therefore possible that BTC will follow something similar to the trajectory below, resulting in a breakout in early May. I do not believe there to be a strong possibility of this happening because I believe that further consolidation is still required at our current level (between $3500 and $4000).

Bit Brain probability of an early May breakout: 10%.

I consider it more likely that BTC will again bounce off the top of the triangle in early May, rebound off the lower side of the triangle again and breakout at a later date – as indicated below.

I am particularly fond of the 4 July breakout possibility as indicated by the second dashed line on the chart below. This is now the THIRD independent method I’ve used which suggests that date as a possibility for a breakout.

The first time I stumbled upon that date was by using Fib time circles – as described in my 7 February post “4th of July fireworks?”.

The next confirmation I found for a 4 July breakout was by overlaying the 2014/15 market on the current one in my 10 February post “Bitcoin – Fib levels” .

This is now more than just a coincidence. Of course nothing is certain, but my feelings that Q3 of 2019 is a likely time for a bullish breakout become ever stronger, not just from a TA perspective, but from an FA perspective as well (perhaps even more so). Fundamentally speaking, I think that the market will be ready to start the climb by that time (“start“, not go into “hype madness” – that comes later).

For those looking to trade a breakout from this triangle (instead of carrying on with a long-term hodl), I suggest a profit target in the region of $5100 based on the height of the ascending triangle. Beware of false breakouts.

The Case for a Two Month Security Deposit