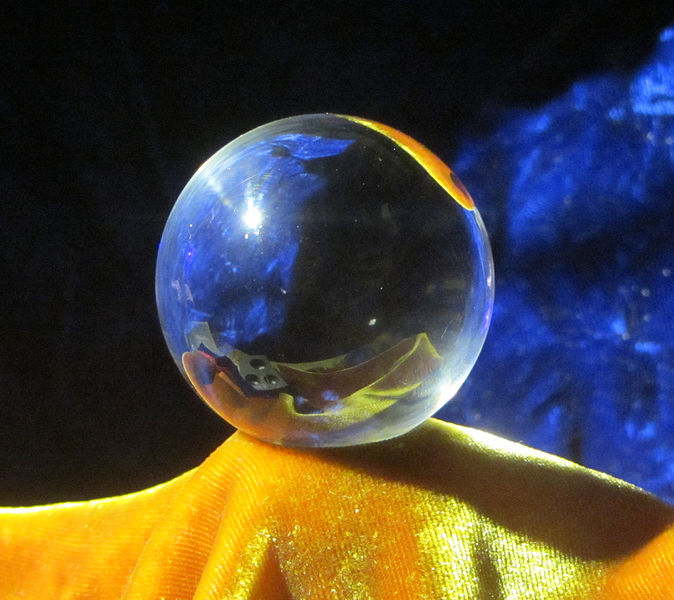 By now the crypto-savvy should all be aware that JP Morgan did not launch a cryptocurrency, it launched a private blockchain for its own use.

As I mentioned in the link: that was not at all surprising. What’s more, it won’t be the last such blockchain. Regardless of the dismay that Ripple fans will feel, big banks truly don’t care about crypto and would rather use their own blockchains (which they have total control of) than piggyback on somebody else’s solution.

What does this mean for crypto? Is it obsolete before it even gets off the ground?

Don’t worry. I have a crystal ball. It has answers for us:

The banks will have their own blockchains, they won’t use crypto. It’s not to say that each bank will have its own blockchain, there will probably be a few big competing chains. Smaller banks will use the chains of bigger banks, they won’t bother spending large sums of money to develop their own. Once blockchains have proved their worth to banks (because they will work – well), big banks will look to either reduce the number of chains in existence, or use some form of cross-chain atomic swaps to transact with one another. Meanwhile cryptocurrencies sit on the sideline.

Because no matter what the banks do, their blockchain solutions won’t be a threat to cryptocurrencies.

No matter how cheap the banks make cross border payments, no matter how fast or how secure, they still can’t compete with crypto.

Because banks will remain banks. A bank is an entity run by bankers, and there is no greedier creature in the universe than a banker (I’m talking big bankers here, not the forex consultant at your local bank branch).

Banks will absolutely not use their blockchains to decentralise wealth creation. You will never be able to mine or stake their blockchain currencies. You probably won’t even have access to them. They won’t work to combat inflation and they won’t take the power of your financial destiny out of the hands of banks and place it in your own. Were to do that, then they would lose control of you (and your government) – their worst nightmare.

Not all people know this. They hear the words “bank” and “blockchain” and to them that means “private cryptocurrency that is backed by banks and will kill Bitcoin and the altcoins”.

People are sheep so people will panic. Expect this, it’s normal, don’t even bother to fight the natural herd mentality, it’s an exercise in futility (trust me, I’ve tried). Don’t sell your crypto just because the market panics (again), which it will sooner or later. Crypto is not a good idea, crypto is an excellent idea. I kid you not when I say that I have 100% faith in the success of cryptocurrencies. 100%.

No bank can ever compete with putting the power of wealth creation in your own hands. Cryptos give you the capacity to generate your own wealth, completely defeat inflation, ensure security (if you are careful), carry out cross-border payments, transact rapidly, view a complete transaction history, avoid corruption, transact completely anonymously and without big brother government able to interfere (or even see what you are up to if you so wish) – banks simply can’t compete with that. How would banks possibly top that?

If banks want to stand any chance then they will have to become completely transparent, abolish inflation, debt, fractional reserve banking, revert fiat currencies to currencies backed by something like gold, forget about quantitative easing etc, etc.

Can you see that happening? Neither can I.

That’s what my crystal ball is showing me now. Take home message: fear not when the rumours of bank cryptos become widespread, it really doesn’t matter. They are no competition for crypto.

Keep hodling that Bitcoin, I’ll see you on the other side.

Crypto Down – After My Last Post Are You Really Surprised?

The Bull run will be driven more by the altcoins…