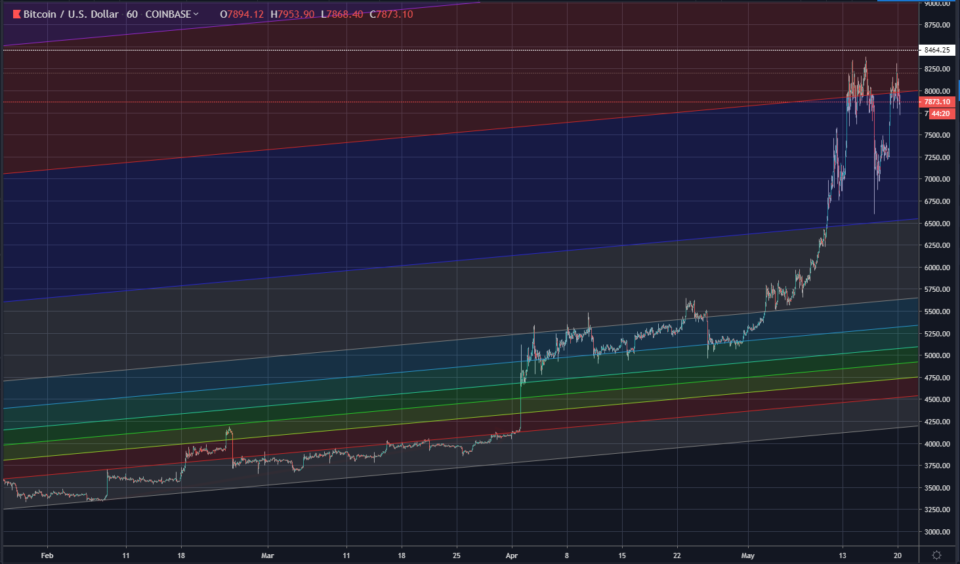 It’s been a while since my last post. Unfortunately I had to play nurse to an injured wife, but she’s back on her feet now and I can finally get back to my crypto blogging! Luckily I was able to keep an eye on the markets, so I still know what’s going on. I even managed to squeeze a few Tweets in here and there.

This is my THIRD attempt at this post, I lost two drafts trying to use a new blogging interface, hopefully this time I am successful! Bear in mind that at some stage I will probably have to change over to the new interface and then things may look a little weird until I can figure out how to regain all the old functionality.

With the pleasantries out of the way, let’s look at BTC.

Today I’m just going to do a broad overview to get back into the swing of things. Quite a lot has happened since my last blog post and a general update is in order.

I’m going to start short-term and zoom out as I go.

For now BTC is bouncing around between $6600 and $8400 (Coinbase prices). There is a diagonal Fib level (2.618) running through $8000 which is acting alternatively as weak resistance and weak support (as seen by the background colour change on the chart below). A reminder to those less familiar with my diagonal Fibs: those levels follow the long-term BTC trend and have proven themselves to be very useful in 2019.

There has been some random weak support in the $6800 -$7300 price range. As far as I can tell it isn’t linked to anything specific (which explains why the level is so ill-defined). That weak level may or may not catch BTC if it falls again.

On the chart you will also notice a horizontal line at about $8650. That is a long-term resistance line which we shall get to later.

In the medium-term, as seen below, BTC has shattered “resistance” layers in an unprecedented bullish rise. I had expected the low $6000s to put up far more resistance. In my recent posts I spoke about bouncing off a level of about $6250 on many occasions, I gave very little chance to it actually breaking through on it’s first attempt! Such posts can be seen here:

Looking long-term (below), we can see the origin of the $8650 resistance line. The resistance should be significant, but then I said that about the low $6000s too! So far BTC has made feeble attempts at breaking it on three occasions (as seen on the first chart), though these are not really proper attempts.

For now I think BTC has run faster than what it should have and has little steam to break through another level yet. Having said that: sentiment is bullish, adoption is happening fast and volume is overwhelmingly high (the volume still astounds me, it’s well beyond that of BTC’s $20000 All Time High). When analysing crypto I have learnt not to say “that can’t/won’t happen”, however unlikely I think something may be.

Though I previously considered it unlikely that BTC will be able to hold its current price, it is by no means impossible. Right now I think that a drop back to around $6000 would be healthy and is perhaps even likely, but there is also more than enough positive sentiment, trading activity and money entering the market to ensure that that doesn’t have to happen. On very long-term charts BTC is higher than what I believe it should be at this stage – I just wonder if BTC actually cares about what I believe or not!

I predicted that consolidation above $6500 was a prerequisite for the start of the real bull market, it’s difficult to say if that consolidation has taken place yet or not. BTC has only been above $6.5k for about 9 days, yet it’s already passed that price by around $1900. I suppose that a dip is still likely, but not nearly as low as I previously thought. Perhaps the low $6000s will act as support if it does so.

Whatever the outcome, the bullish sentiment of 2019 is abundantly clear. The bulls are so strong that even I have been caught off-guard. Over time I foresee ever more people turning bullish, the consequence of which will be a bull market even more epic than what I had previously believed possible. Perhaps it’s time I started making some proper estimates as to how high the next bull market will climb…

Why Don’t My Otherwise High-Achieving Friends ‘Get’ Crypto?