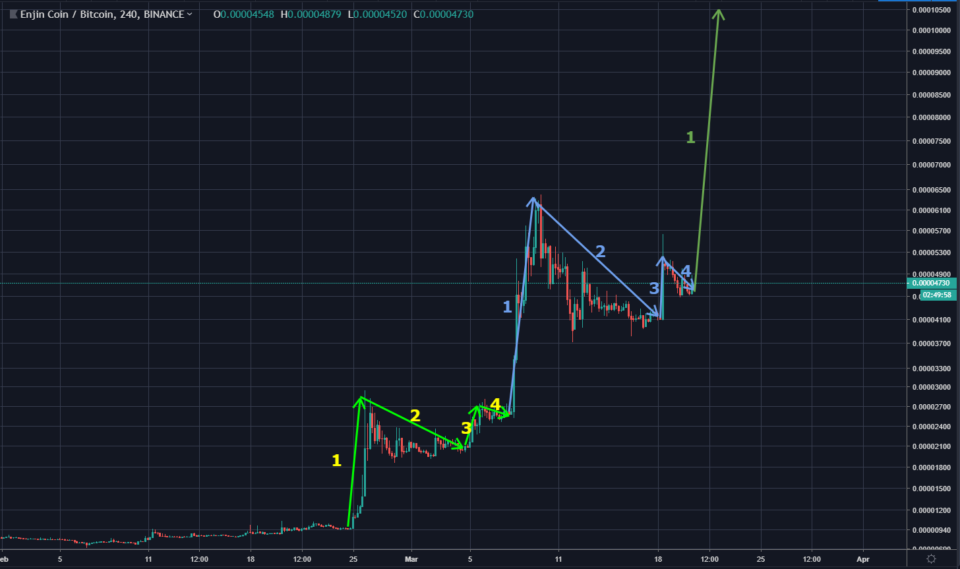 Enjincoin (ENJ) has made remarkable upwards leaps and bounds over the last month, putting even well performing coins such as BNB to shame. So what’s the clever play now? Sell it? Buy it? Hold it?

I’m holding mine. Here is why:

Within a time period of a mere two weeks, ENJ more than doubled in value, not once, but twice!

Three weeks ago (just after the first big climb) I made a comment on someone else’s ENJ post. I was then asked:

“Haven’t you sold ENJ at this price?”

To which my answer was:

If I did sell my ENJ then I would want to re-buy it later as I believe that it still has much growing to do, both as a wallet coin and as a gaming industry coin – two spheres of the crypto industry which will still grow enormously. Not expecting such a sudden peak, I obviously didn’t have a sell order in at the top. With the early May 2018 high now seeming to provide a new support base, I’m hesitant to sell my ENJ in case I can’t get back in at a good price.

Honestly I’m in no rush to sell alts because the market is very low now and I expect my alts to still do a lot more climbing against BTC after the bulls return in a few months time, even those as high as what ENJ is now.”

I have since been proven correct. But, ladies and gentlemen, this is only the BEGINNING for ENJ. As I said in THIS POST (read it if you don’t know ENJ – you need to):

“Enjin Coin (ENJ) – the little wallet that could, the gaming platform, the inventor of the ERC-1155 token – is moving. Fast! News of the wallet and its capabilities is making big waves, and that’s only the start of this powerful multi-faceted gaming coin!”

I maintain that ENJ is only just beginning!

On the charts ENJ has formed a nice repeating pattern. Yes, the pattern has only repeated once, so it’s hardly a hard and fast law, but it does mean that it may repeat again. Soon.

ENJ formed a solid base during the first cycle, and it’s formed one again at its new, higher level. That gives it the consolidation required to launch higher still.

Yesterday I spoke about a bullish Gambler’s Fallacy in this post about when to sell Litecoin. The Gambler’s Fallacy is a double-edged sword which swings both ways. Looking at the chart below you can see that ENJ is trading at a very high price, basically its highest ever (vs BTC).

But unlike LTC yesterday, which is much older and which has already found its niche in the market, ENJ has much more to it and is still expanding rapidly. At this stage ENJ is growing based mainly on its wallet – that’s not even the main part of ENJ, the main part is the gaming side and its non-fungible ERC tokens! ENJ can (and should) therefore not only sustain its high price, but should increase further in price! It would be a fallacy to say that “ENJ must now drop in price” – that simply isn’t true.

I would not be surprised if ENJ does this next:

Of course it may take a little longer than that, but I have no doubt that ENJ will continue to grow, especially after its potential in the gaming market has been realised!

That is why I will continue to hold my ENJ for a long time to come. If you do not own ENJ yet, then I think that this is a good time to buy. Yes, I’m fully aware of the high price, but take a look around you:

The bear market is gone, things are looking up. Coins (like BNB mentioned earlier) are able to maintain a climb when their futures look positive. ENJ is such a coin. The future of ENJ was always going to be very positive – with or without this jump start that Samsung has gifted it. The important consideration here is that I don’t see why ENJ shouldn’t continue to climb in price, I truly believe that it will. The longer the time duration, the more it will climb.

Don’t let a little retracement fool you, don’t let a dip in the market make you think otherwise: ENJ is going places and I suggest that you hop aboard for the ride.

The Sunday Recap – Down the Rabbit Hole 16

EOS seems about to confirm reversal