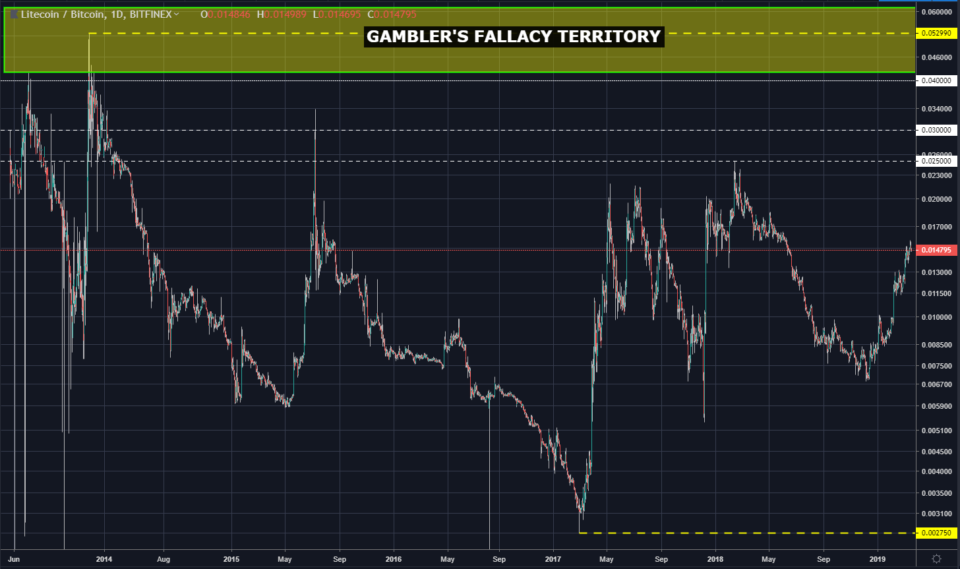 It’s been a good quarter for LTC: ever since mid December 2018 LTC has been gaining on BTC. But since we know that what goes up must come down; where/when should we sell our LTC?

The current LTC climb is a strong one. I say this because LTC is typified by short, sharp price climbs and long, slow price falls thereafter. The current climb is slow and steady, which leads me to believe that it may be a particularly strong one. (See the CMC chart below):

Because this climb is looking particularly strong, it is my suggestion that you sell LTC near the top of this climb (that makes sense – it really does).

Obviously when I say “sell”, I don’t mean “sell to fiat”, I mean “sell to BTC” – because selling crypto back into fiat at this stage is a fool’s errand! All charts on this post are LTC/BTC, none of that poisonous fiat nonsense to be seen here!

Reminder: if you are measuring the performance of your altcoins in fiat terms, then you are doing it wrong!

Long answer : Allow me to explain the “Short answer”:

As you can see from the little CoinMarketCap chart above, LTC has spent the vast majority of its existence below a price level of 0.02 BTC. A price level of 0.03 BTC is as rare as hens’ teeth and last occurred in mid-2015 – which puts my price targets into perspective a bit.

Looking at the chart above, and considering that the current price of LTC is already “above average” at 0.015 BTC, I would class 0.025 BTC as a “realistic conservative high” and 0.03 BTC as the “optimal risk vs return selling point”.

I believe that beyond 0.03 BTC the risk starts to outweigh the return i.e. – you probably won’t reach a higher level and prices will start to drop before you reach your sell price target.

0.025 BTC was reached (just reached!) last year in a climb which was not as strong as the current climb appears. 0.022 BTC has been reached on several occasions in 2017. For that reason I consider 0.025 to be very achievable in the current climb and a good price at which to consider starting to sell LTC.

The current climb IS a strong looking one. Traders who are less averse to risk may want to consider holding on beyond what is considered “wise”. In the interests of full transparency: if I were in this position (I’m not, I hold no LTC at the moment) I would watch the climb very closely and constantly adjust my orders on the exchange (I would probably leave my LTC on the exchange once it breaks through 0.02 BTC). I would set a target sell price for my LTC, probably revised daily, with a trailing stop-loss in case the price takes a sudden dip. If you do this then be very wary of:

I would probably also only trade half or one third of it at a time, in case I end up in a bad position (like a whale tanking the price) or LTC carries on climbing to unexpected levels. Reassess the situation frequently!

Remember – you’re never going to catch the very best price – settle for a “good enough” price, it’s a much wiser and less risky way to trade!

For the record: as things look now I would consider a target of over 0.04 BTC to be firmly in “Gambler’s Fallacy Territory” – the odds of LTC getting so high are not good. Remember that LTC/BTC is not LTC/fiat. There is no reason to expect LTC/BTC to keep climbing in the long-term if you just wait long enough – BTC is a growing cryptocurrency too!

From the perspective of fundamentals, I see it like this:

BTC is the king of crypto and the ultimate store of value – the “digital gold” of the future.

LTC is the “BTC Lite” of the crypto world, the “BTC substitute” used for smaller transactions, but it does not share the “store of value” benefits of BTC, at least not to the same extent.

I expect (and this is a thumb-suck estimate based purely on my experience and knowledge of the crypto market in general) LTC to settle at a market cap of about 1/10th that of BTC’s.

When comparing cryptos I like to use Total Supply as the basis of value comparison metrics. If you use something else your calculations will become invalid in the future due to change in supply – chances are that the perceived value of your crypto will become diluted as circulating supply grows. See this article for more on that topic: HOW MUCH to INVEST in a CRYPTO .

The equation for realistic stable LTC/BTC price is therefore:

…and now you know where I get my “realistic conservative high” sell price of 0.025 BTC from. This is a good example of how you should use the TA of charts and the FA of understanding the markets to reinforce and supplement one another.

But don’t believe me – what do I know? I’m just a random guy on the internet. ?

Go away and crunch the numbers yourself. Use a few different permutations and see what you come up with. This is at least as much art and psychology as it is science. Let me know if you get something different, I would be interested to hear your (probably incorrect) reasoning. Jokes aside, I would (as always) be happy to discuss any alternative answers with you and I’m willing to refine my own estimate if necessary.

Nobody should be loyal to a crypto (except NEO) – that’s just stupid! Crypto feels nothing for you – it’s a series of “0”s and “1”s on a blockchain. You’re not a “sellout” if you trade your LTC for BTC at the right time; you’re a wise trader. You can, and should, consider buying it back when the price swings low again.

Good luck LTC holders – make the right choice that benefits you most!

BITCOIN: either a “Bull” Flag or “BART” Flag