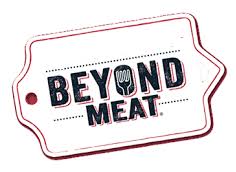 Beyond Meat priced its initial public offering at $25 and now the stock is up more than 200% in less than a week.  And while the S&P 500 closed down more than 1% yesterday, Beyond Meat closed the day up 6%

Beyond Meat, a maker of plant-based meat products is the new IT THING on Wall Street and sold at a supermarket and restaurant near you.

Beyond Meat is also trailblazing a new secular movement away from animal protein.  Beef is loaded with saturated fat and many, many resources are needed to produce 1 lb of beef.  For example,   the total amount of water needed to produce one pound of beef is almost 2000 gallons.  And when cows belch, they account for over 75% of the greenhouse gas, methane.

So yes, although plant-based meats in the U.S. rose 23% last year, it still represents only 1% of the total meat sales in the US.  So yes, because Beyond Meat controlling about 10% of the plant based meat market in 2018, what you have is FOMO in the stock price. But Beyond Meat is beyond over-valued.  For example, with $80 million in sales last year, you get a sales to price ratio of 44 vs. Hormel Foods and Conagra with a sales to price ratio of 2.3 and 1.6, respectively. It also already has a higher market cap than companies that have been around a lot longer.

I just would hate the retail investors to get burned buying Beyond Burger at current prices (like they are in Lyft).  So yes, Beyond Burger is will definitely reward investors handsomely over the coming years, but just get in a discounted price at this point.  Based on Fibonacci Retracements, a possible good entry might be the 50% or the %61.8 retracement.

Price of Steem Firmly Entrenched in the Bottom Range

Can Shaq Save Papa John???

Apple Is At The Mercy Of The US-China Trade War