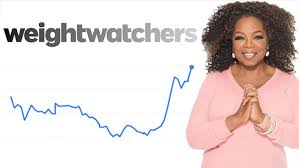 Within the past 12 months I have talked about the Rise and Fall of Weight Watchers.

Nevertheless, due to the Oprah Effect, the stock price of Weight Watchers is up a staggering 1000% since Oprah took a stake 10% in the company some years back, became a board member and become the face of the program, and appear in ads and commercials.

In March of last year, Oprah made $110 million by selling 2 million shares in Weight Watchers…that was a very nice check.

Than in November shares of Weight Watchers fell $20.36 or nearly 30% after the weight-management company saw its subscribers continuing to decline and the company missed third-quarter sales expectations.

The most recent news that I could find was JP Morgan downgraded Weight Watchers two weeks ago due to channel checks revealing traffic to the company’s website and engagement on its mobile app are down double-digits year-over-year.

Price is in the process of breaching the next monthly demand,  so the chart suggest price is headed lower at least to the weekly demand at $24.

This past week, Weight Watchers fell more than 30% after posting a full-year forecast well below Wall Street estimates.  The company also said it expects member recruitment for 2019 to be below 2018 levels, meaning less money coming in.

Oprah’s role as the face of Weight Watches continued to decline in 2018 as a result of her focusing on other business ventures.  But in December, the New York Post said Weight Watchers was looking for new brand ambassadors such as Serena Williams, Beyonce, Kylie Jenner and Khloe Kardashian to promote the company, eventually settling in on Kate Hudson.

However, after the earnings announcement, Weight Watchers said Oprah Winfrey, will play a central role in its upcoming TV and digital marketing campaign for Spring. Oprah is WW’s second-largest shareholder, as she beneficially owns 7,524,344 shares, or about 11% of the shares outstanding.

However, I think Oprah’s halo effect on Weight Watches has finally come to an end. As far as the stock is concerned, I think its dead money and price will continue to tumble over time.   The chart suggests price will attempt to seek buyers at the monthly demand at $10.

You see that Shakeout? #bitcoin

Akami Technologies, A Derivative Play On The Streaming Services

Square Is No Circle